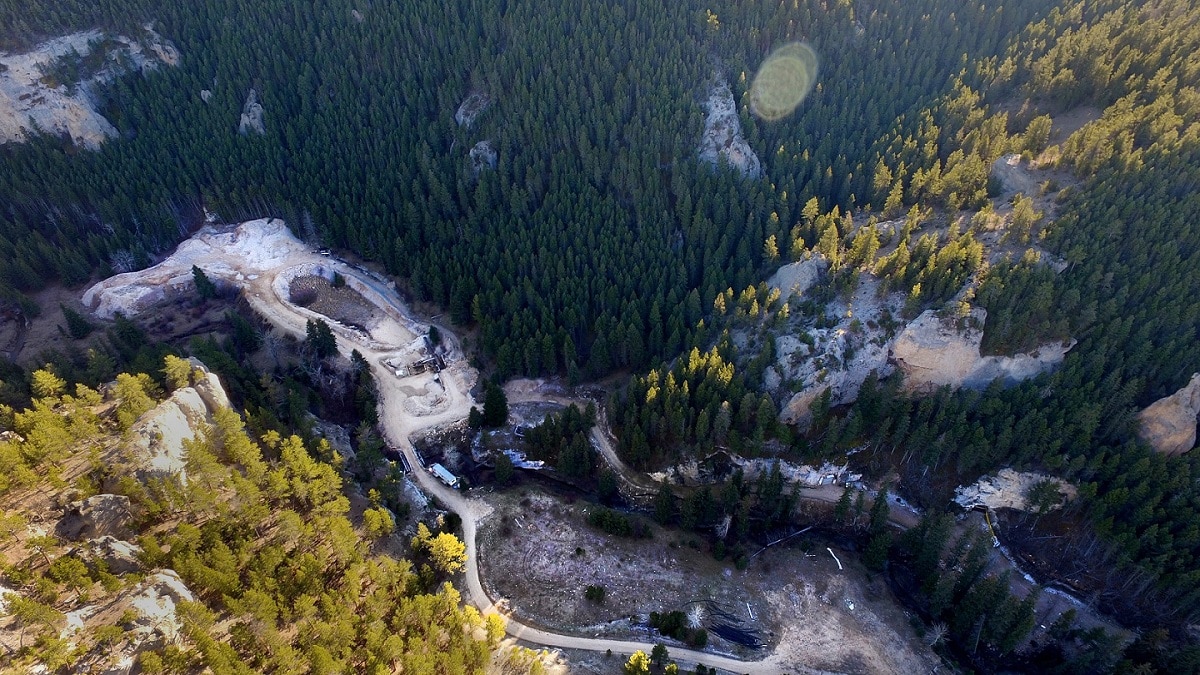 Yogo Gulch in central Montana is one of the most important gem deposits in the United States. These stones, known for their vibrant untreated blue color and high clarity, have always commanded a price premium, especially in sizes larger than 0.75 ct. Yogo sapphires are noted for their intense blue coloration, sometimes referred to as cornflower blue; some are even violet. Because of their natural attractive colors, Yogo sapphires do not need heat treatment. They are also generally free from mineral inclusions.

Yogo also has the distinction of being the only Montana district where sapphires are mined from bedrock or the solid rock that may be exposed or covered by soil and other loose material.

According to local legend, in 1895 gold miner Jake Hoover suspected that the blue stones found in his sluice box in lower Yogo Creek were of value and gave them to an assayer, who sent them off to Tiffany & Co. in New York City. George F. Kunz, their gemologist and Vice President, promptly sent him a check for $3,750. Kuna declared the stones “the finest precious gemstones ever found in the United States” due to their exceptional color and clarity.

Realizing that the sapphires could be the remedy to their financial problems, Hoover and his partners set out to find the “mother lode”. Another prospector stumbled upon the source of the sapphires when he found a fissure filled with soft material in a limestone outcrop. When he washed some of the material, he immediately found sapphires. Hoover and company quickly identified the vein as the source of the sapphires. It did not take long for claims to be staked along the five-mile length of the vein. Eventually, 33 claims, all mining sapphire, were established.

The unique geology of the Yogo mining area leaves an imprint, not just on the geologists and miners that know the area, but also on the sapphires themselves. They are known for their even color, lack of color zoning, and are fairly-free of inclusions. Their quality as cut stones is also increased due to their high luster and brilliance. They are typically a ‘cornflower blue’ color but can also be found in shades of violet or purple. Typically, it is difficult to distinguish sapphires from different deposits because of how physically similar they are.

Montana sapphire can be found along the Missouri River District (Helena), Dry Cottonwood Creek(Deer Lodge), and Rock Creek(Philipsburg). These locations are in the western side of Montana.

Several sapphire bars can be found along the Missouri River, including the Spokane Bar, the Dana Bar and the El Dorado Bar. The El Dorado bar is one of the most famous bars due to its large deposits of both gold and sapphires. The El Dorado strike was one of the few mining operations that was allowed to operate during World War II, due to its large quantity of sapphires available for use as abrasives for the war effort. In more recent times, the El Dorado bar was a fee-digging area where diggers could pay a fee and be able to dig for their own sapphires.

Rock Creek (popularly known as Gem Mountain) near Helena, Montana is one of Montana’s more important secondary deposits. Large quantities of sapphires have been produced from this area. During the Mid-1990’s over 3.5 million carats were produced from Gem Mountain. The Rock Creek sapphires can be found in many colors including blue, green, yellow, pink, purple, and orange. These sapphires (unlike Yogo Sapphires) are heat treated.

Dry Cottonwood Creek flows northwest from the Continental Divide to join the Clark Fork River northwest of Butte. Sapphires have been mined from alluvial deposits along the South Fork of Dry Cottonwood Creek. Total production of sapphires in this area is less than that in other major sapphire deposits in Montana. Sapphires appear to be concentrated for about 2 miles along the South Fork of Dry Cottonwood Creek. They are also found in a small meadow close to the head of the South Fork. Common colors of the sapphires in this district range from pale blue to pale green to very pale blue to colorless. Some other colors that are less common include pink, pale orange, purplish pink, and amethyst. A few sapphires are dichroic, showing colors from pale green to pale blue.

Missouri River District sapphires occur in terrace gravels along a 22-mile stretch of the Missouri River northeast of Helena. They were first discovered by gold miners in 1865. Since then, at least seven individual deposits, called bars, have been mined for gold and sapphires. These bars are geologically known as strath terraces (A relatively horizontal, flat surface of gravel or other unconsolidated material that may have developed when a river was at a higher elevation.), where sapphire-bearing gravel was deposited by Missouri River. The largest of these is Eldorado Bar, which has an area of close to 2 square miles. Missouri River sapphires are typically pale green or pale bluish green. They are generally too pale to be sold as gems without heat treatment, but the percentage that responds to treatment is lower than those from Rock Creek. Rare deep blue sapphires, such as the Big Sky Sapphire recovered near French Bar in 1973, have also been found. The Missouri River features several sapphire bars including the Spokane Bar, the Dana Bar and the El Dorado Bar; these deposits are known as alluvium deposits. (Alluvium: from the Latin alluvius, from alluere, “to wash against” is loose, unconsolidated (not cemented together into a solid rock, soil or sediment that has been eroded, reshaped by water in some form, and redeposited in a non-marine setting.) In other words these deposits were created from the sapphires being eroded and washed down stream and settling in and around the banks of rivers and streams. It’s believed this is due to episodes of basin development and deformation in response to the Pacific tectonic plate folding below the western continental plate.